Every year we celebrate our graduating students as they present on various topics of deep personal interest for an inspiring and engaging discussion for parents, friends, Waldorf school members and the Sea to Sky community.

As the major milestone in the culmination of the Waldorf educational journey, the Grade 12 Projects demonstrate the students’ approach to the world, equipped with the mental and emotional fortitude, critical reasoning, creativity, knowledge and compassion that Waldorf education works to instill.

Congratulations to all the Grade 12 students for their hard work.  Here is a snapshot of the presentations from 2019: 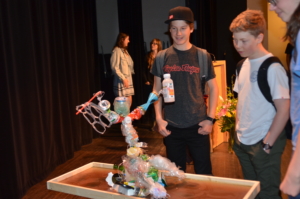 Parasite of the Planet: The Human Impact on our Oceans

How did humans become the biggest parasite to the Planet?

The oceans have become so overwhelmed with plastic pollution that it threatens our very existence for the future.

“Did you know that all the money just raised for the Notre Dame fire disaster would have rid the oceans of it’s plastic 5 times over”. – Neve Abraham.

Excerpt from Neve Abraham_Parasite of the Planet.

Killer Clothes: The Waste We Create

New initiatives to recycle clothes from the landfill are costly and difficult, and yet, humans are starting to admit that we can’t ignore the waste we create forever.

“We first need the will and put in the effort to want to save our world and nature. Every day you cast a vote with the choice you make. What you buy and who you work with. You have the power, use it to save this planet because there is no planet B.” – Eric Sandahl.

(Photo: Eric made this fashionable top from recycled jeans – a huge laborious job with a sewing machine.)

An excerpt from Eric Sandahl_Killer Clothes_ The Waste We Create.

The Strange World of Anime

Anime is defined as a style of animation originating in Japan that is characterized by stark colorful graphics depicting vibrant characters in action-filled plots often with fantastic or futuristic themes.

The voice-overs for the characters and the action that appears in Anime animation is often very unique, with dynamic sound effects and lots of explosive ranges and tones.

“I love to do impressions and would like to be a voice-over artist for Anime or possibly an editor for film or animation.” – Levi Domm

View The Strange World of Anime. 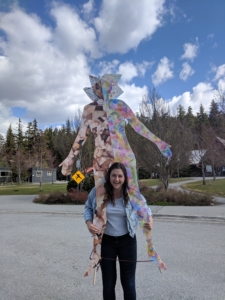 What is the difference between inner beauty and outer beauty? Do we as humans need both to feel ‘beautiful’.

In this day and age of social media and changing perspectives, can we understand what definitions help us ‘Chanel’ our inner beauty.

“I asked a bunch of people ‘what is the most beautiful thing about you?’…the most common response was ‘I don’t know’ or ‘I can’t think of anything. Another possibility is: “You can only truly be beautiful when your inner and outer beauty work in harmony with one another to produce the spectacular individual that you are”. – Amy Gilbert

(Photo: Amy’s depiction of our ‘2 Sides’ asks the fundamental question about ‘beauty’ – do both inner and external beauty matter to how we see ourselves?)

An excerpt from Amy Gilbert_Chanel Your Inner Beauty. 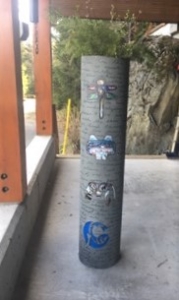 Finding a Balance Between Awareness and Intrusion: Indigenous Cultures and Tourism

Indigenous cultural tourism has become one of the fastest growing tourism trends in the past few decades.

The world-wide popularity of Indigenous areas like the Haida Gwaii located in Northern BC in the Queen Charlotte Islands, is just one example of how Indigenous cultures are having to manage outside interests and pressure to provide access and understanding to their most sacred sites.

“My artistic was inspired by indigenous poles, which play a large role in their culture and arts. It is meant to represent three different ways of interacting, experiencing and representing a place: through actually visiting it, through seeing a photo of it, and through advertisements for it. The tourism industry can have a large affect on how people interact with places and the impact the places leave on them”. – Roshan Beaven

An excerpt from Roshan Beaven_ Indigenous Cultures and Tourism.

Cover your ears as you may not want to know. The dark secret of humanity has been repeatedly covered up in the landfill’s of the past. However, the landfill’s now full. Our garbage is starting to overtake us.

What do we do? How can we change our shopping, our recycling and our lifestyle habits to get control our own personal waste?

“Individual pollution is causing an unnaturally fast form of climate change and humans will be the ones who suffer; bringing awareness is no longer enough, and to reduce the process and save the Earth’s inhabitants it is imperative that humans take action to change their own habits and work together to reduce the amount of damage that could still be done“. – Irie Smith. 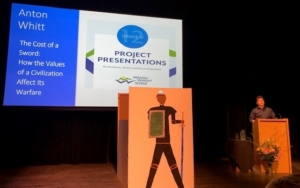 The Cost of a Sword: How the Values of a Civilization Affect Its Warfare

A unique historical account looking into three separate civilizations – a military, a trading and a neutral nation to see how the values of each affected how it waged war, or in some cases didn’t.

The presentation delved deep into the Mongol Empire, known for their strong militaristic values, the Mali Empire which was a vast trading empire and into the country of  Switzerland which is known for its neutrality as a nation.

“Civilization’s values and military, especially in the medieval, relied on each other. The values could not be kept safe without their military and the military needed the values to shape it to be unique to it in a way that their civilization can have pride in it”. – Anton Whitt

(Photo: Anton’s art is a life size cut out face board depicting a soldier from a militaristic Empire.)